Amsterdam, Netherlands, 10 February, 2016 -- Lookout, the global leader in mobile security, today introduced its cybersecurity for businesses and individuals in the Netherlands. Lookout’s cloud-based technology is fueled by a global network of more than 100 million sensors and tens of thousands of apps that are added daily. With this dataset of virtually all the mobile code in the world and the predictive machine intelligence to analyze and make sense of the data, Lookout predicts and detects security threats before they do harm.

Lookout EMEA is led by Dutch native and former President of McAfee / Intel Security EMEA, Gert-Jan Schenk. Schenk recently opened Lookout’s Netherlands office, the company’s second in EMEA, and is growing a local team, which serves as a hub for Lookout’s Northern Europe development. The team is focused on building out business and securing local, strategic partnerships across the consumer and enterprise mobility and security space. The Netherlands is a key market for Lookout’s EMEA expansion -- it’s is one of the most developed markets for mobile with a high density of mobile usage.

Lookout’s launch in The Netherlands comes at a time when the growing amount of valuable data on mobile devices, including corporate data, personal information, financial information and health data, corresponds with an increase in mobile threats. In a recent study of mobile devices associated with the networks of the top twenty-five Dutch businesses, Lookout found one serious mobile threat encounter per twenty mobile devices (five percent), including trojans, surveillanceware and root enablers. 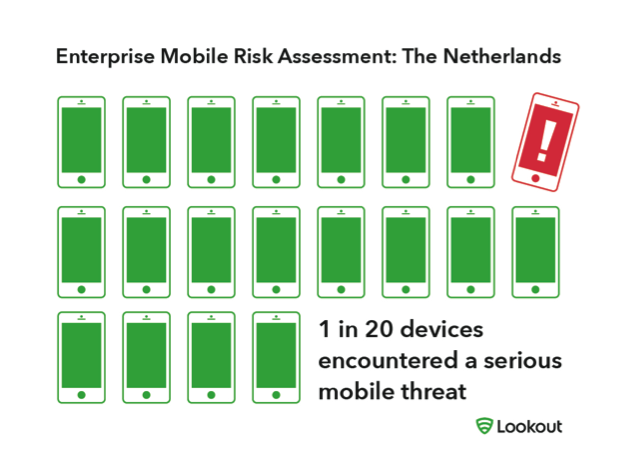 “The fact that these mobile threats are already happening on corporate networks, often unbeknownst to the company, highlights one of the main weaknesses we’re seeing today. There are serious gaps in existing models of security, which are failing to account for the scale, complexity and intelligence of mobile threats,” said Gert-Jan Schenk, Vice President of Lookout EMEA. “Essentially, it means that businesses must change from this reactive model of security, where they wait until they’re hacked, to a proactive security posture, where they’re actively and vigilantly protecting their business.”

Founded in 2007 and headquartered in San Francisco, Lookout was one of the first companies to focus solely on mobile security, beginning with consumers. Lookout challenged major security incumbents by developing a new approach to security using big data and machine learning to tackle security for our mobile world. By starting with consumers, Lookout built a dynamic and growing corpus of mobile threat data, including more than 100 million sensors worldwide.

From day one, Lookout sells Mobile Threat Protection entirely through value added resellers and distributors, including Exclusive Networks in the Netherlands. Lookout is working with leading, local channel partners, including BLAUD, Dahvo, Fondo, and mITE Systems in the Netherlands and Mobco in Belgium and Luxembourg and MDM partners MobileIron and Airwatch by VMWare, to propel distribution and adoption. In Europe, Lookout’s customers include some of the world's largest financial services, insurance, legal, consulting and entertainment firms.

“In this period of high-profile cyber attacks, businesses' concerns about data security are naturally rising which can impede their deployment of mobile technology. At the same time, more organisations are beginning to understand that increased mobility delivers greater business success. Rather than slowing down, smart companies are instead taking a modern approach to mobile security as a critical means to enable their performance.”

“We are delighted to extend our partnership with Lookout to the Netherlands. Our customers will appreciate the ability to add Lookout’s threat protection to their mobile deployments.”

Lookout is a leading cybersecurity company. Our mission is to secure and empower our digital future in a privacy-focused world where mobility and cloud are essential to all we do for work and play. We enable consumers and employees to protect their data, and to securely stay connected without violating their privacy and trust. Lookout is trusted by millions of consumers, the largest enterprises and government agencies, and partners such as AT&T, Verizon, Vodafone, Microsoft, Google, and Apple. Headquartered in San Francisco, Lookout has offices in Amsterdam, Boston, London, Sydney, Tokyo, Toronto and Washington, D.C. To learn more, visit www.lookout.com and follow Lookout on its blog, LinkedIn, and Twitter.

Get the resources call_made